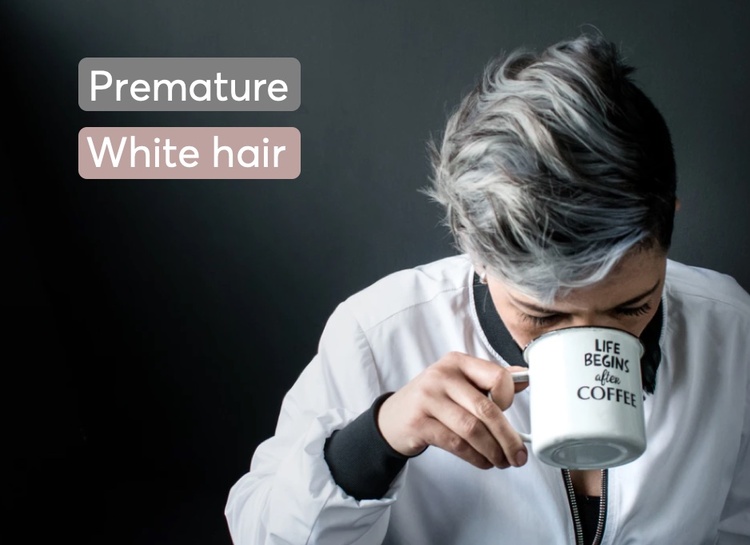 Hair color is created by melanocytes (pigment cells) in the hair follicles, which produce melanin (pigment). The melanocytes become less active during the aging process and produce less melanin, which means less pigmentation in the hair. Hair turns gray because it has little to no melanin, meaning all that is showing is the color of keratin (the protein that makes up the hair).

1. Nutritional deficiencies are one of the causes of early hair graying. One study found that the deficiency in a few micronutrients has been associated with premature hair graying in students, including ferritin, vitamin D, folate, vitamin B12, and selenium deficiencies. These researchers suggested screening for these vitamins and minerals in patients presenting with premature graying of hair and subsequent supplementation of the deficient micronutrients. Correcting those deficiencies with the right dietary supplements can help slow down hair graying.

2. External oxidative stress (caused by smoking, pollution, UV rays, and numerous other factors we may encounter daily) can also lead to graying. Smoking, in particular, has been linked to premature graying.

What are the best topical treatments for premature hair graying?

Polygonum multiflorum (AKA; Fo-ti or He Shou Wu is a tuberous plant native to China and Japan. The meaning of He Shou Wu (pronounced as Her show woo) is "black-haired Mr. He." It is used for centuries in Chinese medicine for anti-aging and lifespan expansion and reversal of grey hair.

Studies have shown that fo-ti has the ability to help speed up the transition of hair follicles from the dormant stage of hair growth (telogen phase) to the growth stage (anagen phase) by working on the FGF0-7 gene, which encodes proteins particular to epithelial cell growth. This is especially important to those who are suffering from hair thinning or hair loss.

What are the best supplements for premature gray hair?

You can’t actually reverse hairs that have already turned gray (besides using a hair dye, of course). Still, besides addressing other root causes affecting your hair, some vitamins and minerals can help slow and prevent further color change. These are the nutrients you need to maintain your hair color and support healthy hair.

Lab studies have shown that vitamin B5 can reverse graying hair. While further research is needed to pinpoint how it affects human graying hair, this vitamin is essential for overall hair health. Vitamin B5 promotes the production of red blood cells, helping to nourish follicles to encourage growth and prevent shedding.

Biotin is a key vitamin for hair growth and strength, as it stimulates the production of the hair protein keratin. Research has shown that people dealing with prematurely gray hair tend to have lower levels of biotin, so supplementation may help counteract graying hair.

Folic acid (also known as folate, or vitamin B9) is a B-vitamin, and a deficiency has been linked to premature graying. This vitamin is vital in producing methionine, an amino acid that plays a role in hair color. Folic acid is also crucial for hair health because it helps with the keratinization of hair, which aids the hair follicles in producing more keratin for stronger hair.

Like folic acid, a deficiency in vitamin B12 has been linked to graying hair in younger people. Vitamin B12 also works alongside folic acid to produce red blood cells and further support overall hair health.

When it comes to hair graying, vitamin C can be beneficial because it has potent antioxidant properties, which can fight against free radicals that can damage hair follicles. It is also a great hair care vitamin because it supports the absorption of iron – we’ll talk more about the link between iron and gray hair below. Additionally, vitamin C supports overall hair health by promoting the production of collagen, which provides the body with the amino acids needed to build keratin.

Research has found that young people dealing with graying hair tend to have a vitamin D deficiency. Vitamin D deficiency has also been linked to alopecia (hair loss), and research indicates that supplementation may boost hair growth.

There is a multitude of ways in which copper supports not only hair color but overall hair health. Copper plays a role in melanin production, helping to make the color more vibrant and prevent early graying. It also supports the production of collagen, helping the body build keratin for strong hair. Additionally, copper is an antioxidant that can fight oxidative stress that could lead to early graying (and negatively impact overall health).

Low iron levels are associated with premature hair graying, and it is believed that iron influences melanogenesis, AKA melanin production. This means supplementation can help get the production of melanin back on track to prevent further graying. Iron also supports red blood cells in carrying oxygen and nutrients to the hair follicles, essential for hair growth and overall wellness.

It is believed that low zinc levels may be associated with early graying, and zinc may also play a part in melanin production. This mineral is also important for overall hair health and strength, as it promotes tissue growth and repair.

The melanocyte lineage in development and disease

An epidemiological and investigative study of premature graying of hair in higher secondary and pre-university school children.